By Sandra - December 16, 2012
If you're jonesing for some Middle Eastern food but can't make it to your usual market in Beirut or Damascus or something, we've found an amazing alternative, right here in my lovely borough of Brooklyn.  On Atlantic Avenue and Court Street, there is a delightful market called Sahadi's that could just save you a trip halfway around the world. 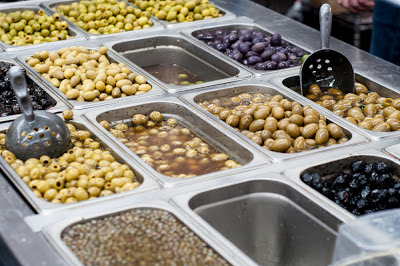 Sahadi's is branded as a Middle Eastern market, but I could probably happily shop there for most of the other food in my diet anyway. When you first walk in, there are plexiglas boxes upon boxes of goods that the very friendly and helpful staff will pack up for you in bags.  Spices, nuts, dried fruit, candy, grains, herbs, beans...it's all a melange of different textures and colors and aromas.  Just behind this little fort, there is a salad bar arrangement of all types of olives, bobbing up and down in their brines -  the best one to put in a martini, olives stuffed with feta, olives stuffed with garlic. The feta and garlic ones were especially delicious: the feta adds an extra salty tangy pucker, and the garlic actually mellows out the saltiness to some degree.  We ended up with boxes of fresh olives, an unusual sight considering we normally see olives swimming in jars sitting in supermarket shelves. 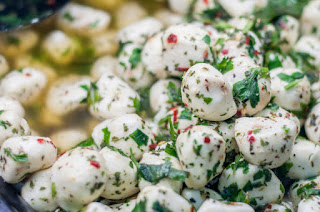 Next, we peeked around the cheese/dairy cases. There are small blocks of every cheese imaginable. The cheesemonger was actually a restauranteur in my neighborhood, but she gave up her restaurant to study and sell cheese at Sahadi's. We bought an interesting crumbly cheese studded with dried cranberries.  The cranberries added a wine-y, tart flavor to the cheese and I was kind of addicted. 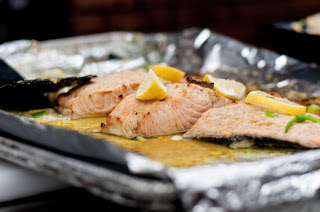 Following the flow of traffic was the glass case of deli items, though not the ham and bologna and turkey cold cuts in other markets.  Rather, here there were enormous tubs of hummus, babaghanoush, tahini (Middle Easterners really LOVE their tahini!!), yogurt (Lebanese labneh with and without thyme; more on this later), tzatziki, taramosalata, samosas, spanakopitas (Greek spinach pies in flaky phyllo), mozzarella balls, octopus salad, curried chicken salad, the works!  This was one of my favorite spots in the whole store.  We bought scoops and pints of half a dozen different things, and on top of that, some savory pastries for snacking later that day. 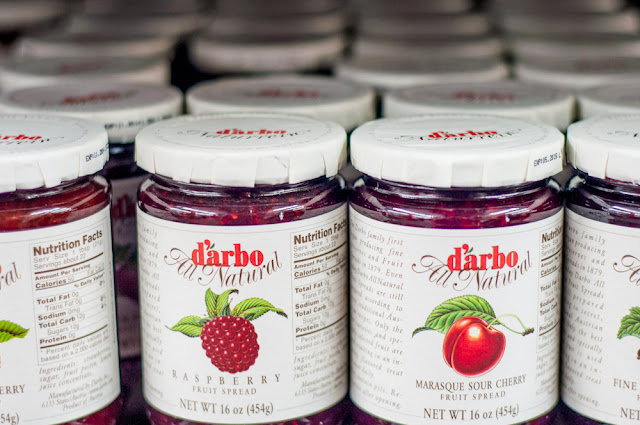 Alex and I both thought the hummus and babaghanoush were a bit too heavy on the tahini, but I was absolutely head-over-heels in love with the labneh with zaatar (thyme).  My little pint looked like a thick cream cheese speckled with a whole slew of herbs.  The taste blew me away: it was like an extremely thick, tangy Greek yogurt or kefir.  Just a tad on the savory side thanks to the spices, I've had labneh with zaatar served with olive oil, which gives it an even richer, floral flavor.  I can see how it wouldn't be for everyone: it is very tangy, and I know how Americans like their yogurts all sugary and fruity, which is disappointing because the typical American palate is missing out on a lot of interesting flavors!  For that matter, I think people of my heritage/my household are also conditioned to dislike sour/tangy stuff: yogurt is translated as "sour milk" in Chinese, and my mom will only eat yogurt if it is flavored like pina colada or mixed berries.  It's only when I escape to work, where my coworkers come from varied places as Russia and Austria and Romania, that I can enthuse about kefir and labneh to understanding ears. 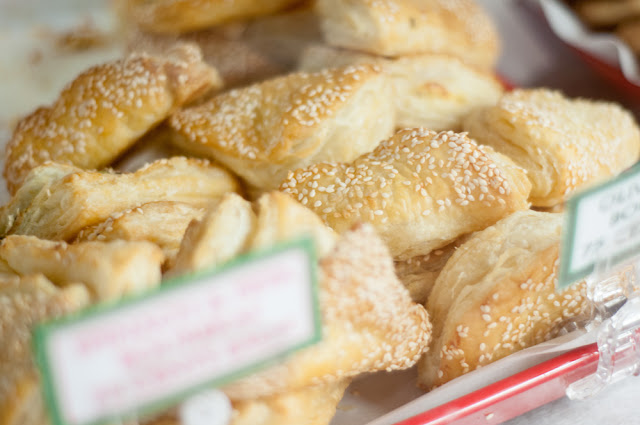 Welcome to Veritasty, a blog about the diverse and affordable food adventures of two millenials in New York City! We hope you find our stories and photos truthfully delicious.